Lt. Col. Ted Lumpkin, Jr. passed away December 26, 2020 due to Covid-19 complications, just short of his 101st birthday. We are devastated by this development but are certain Ted would want scholarship efforts to continue in his name. You can celebrate his legacy by sending a student to college in his honor.

Theodore (Ted) George Lumpkin, Jr., was born on December 30, 1919 in Los Angeles and attended LA area public schools, graduating from Jefferson High School in 1938. He attended Los Angeles City College in 1940, earning an associate in arts degree in mathematics. Ted was a 21-year old junior at UCLA when he was drafted into the military on July 1, 1942. After receiving basic training and radar training at Tuskegee Army Airfield in Tuskegee, Alabama, in October, 1942, Ted was selected for officer training at Miami Beach, Florida, Air Force Candidate School.

He graduated on January 20, 1943 as a Second Lt. with the US Army Air Force and was assigned to the 100th Fighter Squadron in Tuskegee, Alabama. He served as an Air Intelligence Officer during his WWII tour of duty in Italy and in the Western Europe Theater from 1944-1945. During this period, Ted was a member of the 332nd Fighter Group, which consisted of the 99th, 100th, 301st and 302nd Fighter Squadrons. By the end of WWII, Tuskegee Airmen became on of the most highly decorated units in military history.

Lumpkin returned stateside in November, 1945 until his honorable separation from active duty as a Captain in 1946. He completed his undergraduate degree at USC, graduating in 1947 and furthered his education by earning a master’s degree in 1953, also from USC. On September 10, 1948, Lumpkin married Georgia Louise Kelly, and to that union were born three sons and one daughter – Kelly, Theodore III, Timothy and Ellen. He continued his military service with the inactive Air Force Reserves and would later retire from the active Air Force Reserves in 1979, with the rank of Lt. Colonel. In the same year, Ted joined RELAC.

Also in 1947, Lumpkin began working for Los Angeles County and over a 32- year career, he worked for several LA County departments, retiring from the Department of Community Development at the management level. After his retirement, Ted started a new career in real estate, where he was a State of California licensed real estate broker, owned his real estate company and was active in professional realtor organizations. On December 29, 2019, Ted was guest of honor at his 100th birthday party, hosted by the LA Southwest Association of Realtors and the Consolidated Board of Realtist, with over 150 friends and family in attendance.

On Saturday, December 26, 2020, Ted Lumpkin died from complications associated with Covid-19 at Kaiser Permanente Hospital and he is survived by his wife Georgia (who turned 99 on January 6, 2020), 3  children, 9 grandchildren, one great grandchild and many nieces and nephews. According to his widow, “he went out with his boots on” because he did not suffer for a long period of time.

According to Ted’s family, one of his lifelong ambitions was to live to the age of 100, since his father had lived to the age of 96. In addition, Ted’s remains will be cremated and his ashes dispersed at sea by his son, Theodore George Lumpkin III, a licensed pilot.

As a Documented Original Tuskegee Airman, (DOTA) Lumpkin had over a decade of experience with Tuskegee Airmen, Inc.(TAI), the national non-profit organization. He was also a national board member, western regional representative and served as Los Angeles Chapter President. He was highly active in community involvements and served as board member of the Tuskegee Airmen Scholarship Foundation (TASF), beginning in 2007. He was an exceptionally strong supporter of the Foundation and an avid fund-raiser, having raised thousands of dollars for scholarships, targeting financially and academically deserving underserved students.

Those who wish to make tax deductible contributions to TASF in Ted’s memory, may do so as follows:

Our deepest and sincere sympathies are extended to the grieving family of Theodore (Ted) George Lumpkin, Jr.
--- Jason H. Williams, Contributor
Why Tuskegee Airmen Think Education is so Critical

Denied so long of the right to become pilots, the Tuskegee Airmen capitalized on their education and training to become some of America's most recognized and decorated pilots serving in WWII. Known as the "Red Tails," they seized the opportunity to prove to their detractors that excellence was not a matter of color, rather, a matter of commitment. Military personnel on the ground and in the air supported the Airmen including mechanics, nurses, navigators, bombardiers, and other who kept the planes in the air. They were all contributors in the "Tuskegee Airmen Experience."

Education remains the leading factor in moving people out of poverty and into the middle-class or above. The Foundation's focus on financially and academically deserving students is a critical effort to bring the most vulnerable students into competitive positions for high paying careers. However, there are professional fields where this populations is severely under-presented, particularly in the fields of aviation, aerospace, STEM. Balancing workplace opportunities means increasing the number of cultural minorities and under-resource individuals that enter these fields. To this end, the foundation, which was created by original Tuskegee Airmen, is fulfilling its mission by providing 40 or more scholarships each year.

How you can help

You can honor Lt. Col. Lumpkin, an Documented Original Tuskegee Airmen (DOTA) and former board member of TASF, by making a memorial donation to the scholarship fund. Click on the donate button, select Ted Lumpkin in the drop down box, and make a donation of $10, $100, $1,000 or more to celebrate the life and legacy of a great and honorable hero. Ted would be elated!​

A Profile in Courage, Commitment, and Discipline

Ted in Unsung Heroes of the Greatest Generation 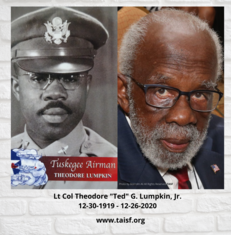 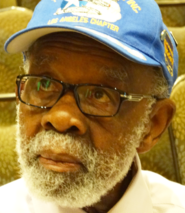