THEY FOUGHT COURAGEOUSLY TO DEFEND OUR COUNTRY

Now they are fighting to educate the next generation...

The Tuskegee Airmen, one of the most recognized and decorated groups to serve in the Army Air Corps during World War II,  are now leading the fight for educational excellence. By providing scholarships for first-year students entering college, the Tuskegee Airmen remain active and engaged in one of today's most critical causes, bridging the gap between high school and post-secondary education.

Continuing a legacy of courage and commitment to issues of social justice and equality, the Tuskegee Airmen in 1978 created a fund aimed at providing scholarships for deserving students, the financially challenged, as well as the children of servicemen. These undergraduate scholarships serve to supplement the heavy financial burden of students entering college and are offered to African Americans, Hispanics, Asians, other ethnic minorities as well as other applicants without regard to race.

The Foundation places particular emphasis on students who will pursue careers in aviation, aerospace, and science technology, honoring the living and deceased members of the Tuskegee Airmen who overcame racial barriers to achieving their dreams of becoming pilots, aviators, as well as air and ground support personnel.

Make your gift a Corporate Match

"The privileges of being an American belong to those brave enough to fight for them." 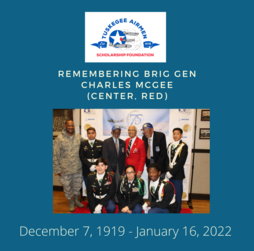 Proud recipients of the Combined Federal Campaign (CFC). Government employees contribute directly to our cause through payroll deductions.

GuideStar is the world's largest source of information on nonprofit organizations

Supporting  Careers in aviation, aerospace, STEM, and beyond...